FIRST there were the fatwas and pronouncements by Islamic scholars on the status of Woolworths in the global BDS movement. Then well-heeled young Muslim students staged a bizarre flash-mob event, consisting of coordinated dance and movement while shouting Pro-Palestinian slogans. Then the combined sit-ins by SACP and BDS members, and now the latest round involving COSAS and a badly executed pig. 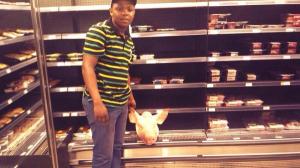 Although Woolworths stocks less than 0.1% products sourced in Israel, the high-end retailer has come under fire by youth groups and students who wish to see Israel replaced by an Islamic republic under the Caliphate.*

The recent COSAS porker incident, (what about cruelty to animals?) involved a failed attempt to contaminate a “kosher” meat section of an outlet in Sea Point, frequented by Jews, and marks a strange new turn in the campaign.

If anything, COSAS has merely demonstrated the troublesome nature of competing dichotomies in the Middle East.

It is one thing to target so-called ‘Israel Made’ goods, it is quite another thing entirely to black-list Kosher products eaten by Jews, forcing Woolworths to also recall Halaal products. Similar dietary laws apply to both groups and many of the products affected have duel labeling.

“We will destroy any halaal products that may be affected and take any other appropriate measures.” she said.

The resulting misadventure, in essence the expose of the culinary habits of rival and competing religions, and the rules surrounding kashrut and halaal produce, signals a troubling escalation, and we have surely not seen the end of it — over 40 BDS members were arrested over the weekend for creating a public nuisance in a campaign endorsed by SACP Higher Education Minister Blade Nzimande and struggle luminary Denis Goldberg.

While Goldberg has criticised the SAJBD for not taking a stand on apartheid, it should be noted this position was also common to the MJC which refused to demand an inquiry into the death of Iman Haron.  Muslim support for apartheid as recorded in the TRC Final Report, is thus also part of the broader picture relating to BDS’s political project — the revision of South African history, and the relocation of apartheid to the Middle East in a short-circuiting of debate that avoids crucial questions regarding a solution.

The Woolworths ruckus may seem opportunistic and ill-considered, given that other retailers such as Pick ‘n Pay and Shoprite have more exposure to Israeli produce.

Then there are the uncomfortable questions which need to be posed regarding Israel’s many BEE deals with the ANC ruling party.

Remgro, a South African industrial conglomerate, which is also a large investor in Kagiso and Sabido, own several Israeli equity and IT firms, including Veritas Venture Partners and Fring.

Naspers which has ties with Remgro, recently bought Similarweb, an Israeli IT firm.

(*Certainly, the nuanced bipartisan and non-sectarian secular views of the late Nelson Mandela relating to a two-state solution and the 1967 borders, do not make for a pithy slogan, as those waving around the Jordanian flag and shouting: Free Palestine! The paradox of support for another Palestinian state while there is a war against a renegade Islamic State has also been remarked upon.)