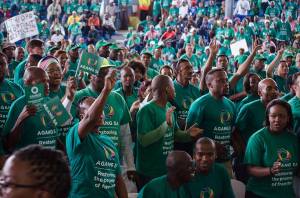 Like all South Africans we have been mourning the father of our democracy, Nelson Mandela, and asking ourselves how to express both our grief and our gratitude for the life of a man whose spirit touched the whole world and inspired us.

The Day of Reconciliation on 16th December reminded us of his example in reaching out and embracing all citizens. We cannot help but measure our country’s progress against the vision of a unified country that he set out to achieve.

South Africa today is a shadow of its apartheid self in many ways but if we’re honest with ourselves, truth and reconciliation still eludes us.

While apartheid had the unintended consequence of uniting black people, irrespective of culture, creed or nationality, in the 20 years since we entered democracy and particularly in recent times, we have seen the prospect of unity across all cultures unravelling.

The wounds of apartheid still linger – poverty still exists along racial lines – and these wounds have been aggravated by the government corruption that has robbed our people of their dignity and caused distrust and bitterness.

Tribalism rears its ugly head, often encouraged by politicians. Targeted xenophobic attacks against Africans continue. We need to sort out land and affirmative action now, not later. As race groups we are perhaps less trusting of one another and less willing to cooperate with one another than we ever were before in democratic South Africa.

We have reached a stalemate. We can no longer look each other in the eye and say ‘we’ve done everything we can so that all our brothers and sisters have freedom’. We need to take forward the founding ideals of our democracy – dignity, equality, freedom for all – and change how we speak to each other so that we work together to realise them.

We believe we urgently need to look at the failings of the first Truth and Reconciliation Commission. Amongst these is the fact that the TRC was never meant to be an event but rather a process. Just as apartheid wreaked havoc on generations so too must the process of truth, healing and reconciliation be carried on across generations. There are other issues too, including the matter of the hold-ups in paying out the reparations promised reparations to victims.

That is why the Agang SA Youth Forum is calling for TRC II, and not just in the form that we had. While TRC I focused on truth and reconciliation primarily between races, we feel that TRC II should have an expanded scope to examine the truth and reconciliation that has to happen between socio-economic classes, between labour and capital and between political parties and the electorate.

Even in the most difficult times Madiba thought with his brains and not with his blood. It is not enough to just scream at one another; as a mature democracy we need to now find ways of reaching meaningful agreement. We need to engage honestly with our hearts and minds and out of that come to practical and shared solutions as South Africans on how we address our concerns.

To that end the Agang SA Youth Forum invites South Africans to engage on the best way to make TRC II come alive.

We are working to ensure that TRC II becomes Agang SA policy because whilst our party has the policies to restore the promise of freedom for all South Africans, we believe that a TRC II process would ensure that they are implemented in an environment in which they can have the most impact.

Since the initial TRC more information has come to light that has opened up old wounds and there are new wounds as socio-economic divisions have widened still further. We live in the most unequal society on the planet.

For the millions of our poorest brothers and sisters who remain dispossessed, the world will not change until we change the political and social context.

Our best moments as a nation are where we have found cause to work together and walk together towards a common goal. But the depth of our anger and resentment is such that we now struggle to contain it even when grieving for Madiba. We need leadership towards a point of meaningful, constructive engagement that produces concrete improvements to lives of all South Africans.

To get things moving we will be seeking an audience with Archbishop Desmond Tutu and other key players in the TRC I process and other stakeholders in the private, public and social sector to look at how TRC II could be structured to make change now and to lay foundations for the next 20 years.