The narrative provided by President Zuma isn’t true. In a recent address the president suggests it was pressure from the West which lead “the apartheid government to dismantle its nuclear weapons and programmes before the Communist Bloc-backed ANC could take over power at the end of the Cold War.”

Not only does he forget that the Soviet Union collapsed in 1991, and thus the movement which rose to power in 1994  had no backing from the ‘Communist Block’ as such, but he is being a little disingenuous when he attributes our nation’s constitutional imperatives to tinkering by the West.

The campaign against nuclear energy was part and parcel of the campus revolts and anti-apartheid movement during the 1980s. Environmental groups such as Koeberg Alert and Earthlife Africa, campaigned alongside anti-apartheid activists, linking apartheid and the environment, during successive periods and under the banner “forward to a non-racist, non-sexist, nuclear-free continent”.

Although South Africa’s nuclear weapons programme was ostensibly abandoned in 1989. It was the Treaty of Pelindaba, requiring that parties “will not engage in the research, development, manufacture, stockpiling acquisition, testing, possession, control or stationing of nuclear explosive devices in the territory of parties to the treaty and the dumping of radioactive wastes in the African zone by treaty parties”, which came into effect on 15 July 2009, ratified by 28 countries, which achieved the end-result. The African Commission on Nuclear Energy, was thus set up in order to verify compliance with the treaty,

None of this would have been possible, if the first conference on Environment and Development, held at UWC and attended by representatives from recently unbanned political parties had not accepted environmental justice and sustainable development as policies for our country. It was thus pressure from the broad campaign for environmental justice on the African continent which resulted in the eventual capitulation by the apartheid government and in turn the dismantling of the nuclear programme, alongside subsequent initiatives.

It is no surprise then that South Africa is the first country in the world to enshrine ‘ecological sustainable development’ in its constitution and to willingly give up its nuclear weapons programme. As such our Constitution adopted the peace principles and environmental priorities that defined us as a nation, and this without any intervention required by the Western Powers. 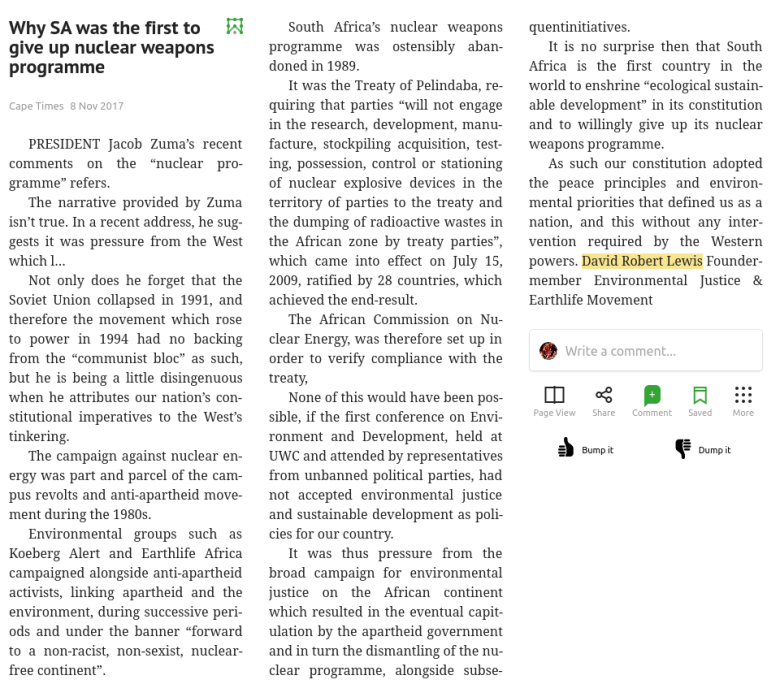