THIS week saw apartheid media firm, Naspers in the news with a fresh scandal, large enough to top any previous peccadillo. The sheer amount of opinion pieces generated by South Africa’s media, and the scale and tone of the inquiry into the press is quite impressive.  It marks a turning point insofar as a shady history of decades long immunity from criticism is concerned.

At first, the opposition Democratic Alliance, once staunch allies of the firm, but now in a marriage of convenience with the EFF, sought to buttress growing metro and provincial leadership by exposing what appears to be another influence peddling scandal.

The story was quickly picked up by technology and business sites, Business Tech “R100 million influence”  MyBroadband “diabolical and secret R550 million” and Business Live “sabc greasing”, showing some disparity in the figures and eliciting Hlaudi counterspin from IOL and a series of Alec Hogg advertorials on Moneyweb “reports malicious” “Naspers not concerned” and also Business Live “not involved”

That Multichoice is involved in a number of corrupt political deals harks back to the founding of the pay channel company under Naspers director PW Botha. The story is not unique so far as this outlet is concerned.

The company simply moved from state capture under the National Party, to state capture under the ANC. All documented here. Massive pay-offs to those in power with the ability to make decisions, appears to have been the norm. Significant too, are the latest attempts by Naspers subsidiary Media24, itself involved in a variety of scandals, to dodge the broader implications of its boardroom being interwoven with  a “corrupt nexus” involving Multichoice, to use former editor of the Weekly Mail and adjunct professor of journalism Anton Harber’s term.

Harber who recently moved from his academic post to eTV, an entity itself involved with Multichoice (via Remgro and Kagiso), a little out of character but unsurprisingly given his recent tenure, appears to have equivocated on the issue by writing what can only be termed a Daily Maverick fluff piece in defence of Naspers, urging the company to face up to the charges while painting a picture of an apartheid firm which miraculously transformed itself.

The piece is unfortunately devoid of facts and appears to ignore my own case against the company, and thus the belated apology issued by CEO Esmerie Weideman.  Advertising agency executive Deon Wiggett wasn’t having any of this. The founder and creative director of Fairly Famous, “a progressive advertising agency” didn’t buy the spin doctoring and produced what can be called the best roasting of Koos Bekker in the press yet.

The Naspers board issued a statement, proclaiming their 80% owned child to be autonomous, with their shared directors ring-fenced on paper by the law, while major Naspers shareholder Sanlam issued a similar denial of responsiblity. Bob van Dijk’s “its not our problem” defence in this regard can only be described as bizarre.

US law firm Pomerantz announces it is investigating Naspers on behalf of Paypal investors, for securities fraud.

WITH the current national fixation on “state capture”, public fascination with the intrigues of the Zuma administration and calumny surrounding the Guptas, it is easy to forget the blueprint for graft was laid decades earlier. Apartheid, Guns & Money, a 600+ page doorstop of a book by Hennie van Vuuren, and published by Jacana Press, debunks several popular myths associated with the past regime — that corruption is a purely racial phenomenon, that apartheid South Africa was an “isolated state”, that democratic freedom signalled a break from the past, that the defeat of apartheid was inevitable and that we cannot undo this wrong.

Van Vuuren reveals in painstaking detail, utilising research garnered from recently declassified documents and interviews with key players, how a secret economy — “a global covert network of nearly 50 countries was constructed to counter sanctions” and “allies in corporations, banks, governments and intelligence agencies” helped move cash, illegally supplied weapons for the apartheid money for arms machine. ‘In the process whistleblowers were assassinated and ordinary people suffered.’

Revealing a ‘hidden past in a time of oppression”, the work is a masterful coup, providing details on the Special Defence Account (SDA), long the bane of the anti-apartheid movement. An investigation into the assassination of activist Dulcie September is both poignant and long overdue. Dulcie was “not just murdered she was erased.” Obtaining a copy of the TRC investigation unit’s report into the murder, kept under lock and key for 20 years by Dept of Justice officials ‘took an enormous effort by a team of lawyers and the South African history archive’.

The full extent of the apartheid enterprise under PW Botha and Magnus Malan et al, will come as a shock, as we finally discover the details of the secret projects, many of which were only alluded to in proceedings of the TRC, and its 3000+ page report prefaced by an awkward explanation that many documents pertinent to the proceedings had already been destroyed.

It is an extremely disturbing picture which emerges, the more so since it speaks, both to a current generation, for whom the machinations and covert nature of the regime will come as a surprise, as too survivors, many of whom may have been too young to appreciate the high level of manipulation occurring. That the TRC report has its failings can be seen in the statement by Van Vuuren, that not all documents were destroyed by Armscor in Project Masada. There also appear to be tonnes of documents sequestered in archives such as that of the National Party, and this begs the question on what is being done to preserve South Africa’s heritage of the past struggle for future generations.

Sections on “Naspers: the tap root of the National Party” vindicate my own investigation into the subject, as does the discovery of correspondence by one Ton Vosloo gifting the National Party with ample funding. The role of PW Botha, as a Naspers board-member, is also aptly described, as too the controversial incident involving his company’s opposition to the TRC, (the appearance of 127 apartheid collaborators who walked away from the commission, as conscientious journalists) and it is trite that many of the corporate entities upon which the late Anton Rupert sat, and related to the enterprise, like that of Christo Wiese, were also involved in the regime. But according to van Vuuren, nothing has emerged yet from the recently discovered archives, directly linking the Rupert family to the PW Botha administration and earlier Nat administrations, save for his generous donations to party successor FW de Klerk.

One cannot help thinking that any story about Federale Volksbellegings and sanctions-busting would be incomplete without relating the history of one of its founders. It thus appears the author has either not read Anton’s own biography about “the organisation that finally lured Rupert away from academia”– or has sought to downplay the Rupert factor for some political reason, as they say, ‘absence of evidence is not evidence of absence’. This failing, minor in comparison to the great work in uncovering details of the SDA speaks to the need for peer review and perhaps a more scientific approach to the puzzle. There are still quite a few surprises in store for readers, and especially related to covert information regarding previously unknown collaborators and I won’t give the game away by relating all the dirt here, suffice to add that Apartheid Guns & Money is certainly a great start for information activists and a must have in any private collection of apartheid arcana, and deserves to be made available to scholars via public and academic libraries. 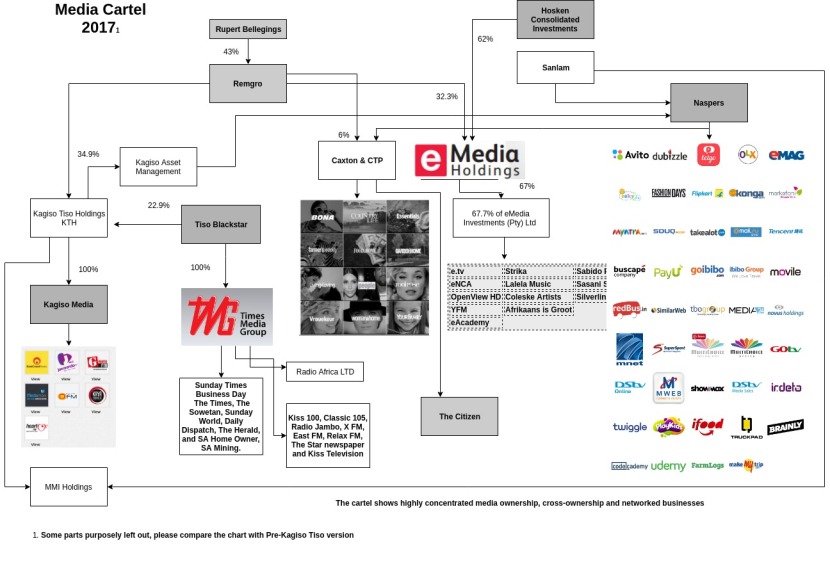 HUFFINGTON POST need look no further than inside the offices of its local owners at the Naspers Building, where portraits of apartheid theologian DF Malan were openly displayed near the editors office, as late as 2006 when I attended an Eidos training course.

Two portraits that of Naspers founder JBM Hertzog and Perskor business partner H F Verwoerd are depicted in the piece published by Huffington.

By attempting an investigation of apartheid artwork, in a curious piece seemingly giving the appearance of editorial distance from the problem of their own association, the company is merely playing into the hands of those at Naspers who would revise history. The article fails to disclose Huffington’s business connection and involvement, and unfolds as if the portraits shown are merely that of some troublesome politicians.

No Mr Du Toit, you’re not investigating mere ‘apartheid art, you’re investigating your own history — the history of the self-same company instrumental in the creation of apartheid and the resulting tragedy which unfolded.

Recently Naspers directors have appeared at pains to create the impression they are the heroes not the antagonists of the struggle for freedom. The historical record is a little different and shows that Naspers were indicted on crimes against humanity and gross violations under apartheid by the TRC. The piece is consistent with the campaign of opposition to accountability.

In bringing the Huffington Post to South Africa, Naspers have gained an English language daily online title. They need to be reminded apartheid is still a crime, whatever the language, and whichever the colour of the ‘alternative facts’ procured by the Deputy-Editor.