Publisher: David Robert Lewis is a cognitive dissident, organic intellectual, and activist-at-large. In 2005 he started blogging on the Mail & Guardian’s online blogging platform, but soon found he was being censored. A six month battle to recover material followed after which he moved to WordPress. Thankfully, WordPress are a lot more progressive and liberal than the media in his own country. (see also this post) and (this one).

“The media has also been known to resort to censorship to protect its commercial viability. In the process, it draws boundaries around public discourse. Rapport’s firing of columnist Deon Maas, after he penned a controversial column, falls into this category. So does Media24’s threatened defamation action against media activist and former employee David Robert Lewis, for criticising the company.” Jane Duncan, Business Day

“This is a provocative and useful contribution to a long-running debate.” John Stremlau

“Because you’re lapping up the crap about Independent Media and Tiso Blackstar being involved in a “media war”.” Chris Roper

PLEASE DONATE
You can make donations via my
PayPal Account

PLEASE SUPPORT A REVIEW OF MY CASE BEFORE SOUTH AFRICA’S CONSTITUTIONAL COURT, AN UNFAIR DISCRIMINATION CASE AGAINST A MEDIA CORPORATE IMPLICATED IN THE APARTHEID REGIME AND A RACIST AND IRREGULARLY GAINED DECISION WHICH REITERATES APARTHEID THEOLOGY. I URGENTLY REQUIRE LEGAL SUPPORT SINCE MY LEGAL INSURANCE WAS UNLAWFULLY REPUDIATED AND I HAVE BEEN DENIED ACCESS TO LEGAL AID. (see issues and conflict of interest) and Lewis v Legal Aid SA, High Court, Western Cape (pending).

You can donate via Paypal

David Robert Lewis was involved in the student uprisings of 1987 at the University of Cape Town. He is a graduate of the Centre for African Studies, holds a degree in social science and political studies and has co-authored a book on environmental development with Mamphela Ramphele, alongside 26 contributors. The banning of campus organisations and especially academic staff such as Prof Peter Horn, ended Lewis’ academic career. While at South Press he exposed the trophy hunting operations of General Magnus Malan in Namibia and Angola, but was later silenced. He is responsible for investigating the link between apartheid and the environment, and the later inclusion of sustainable development in the country’s constitution, and is a pioneer of “nonracial dialogue” having organised a series of public events in the City, in contravention of the Group Areas Act and separate amenities legislation. The Separate Amenities Act was only repealed on 20 June 1990.

As a technologist, futurist and promoter of free and open source software, Lewis was one of the first persons in the country to write about the positive aspects of software piracy. He later became a hacktivist and was involved in the very first mass online protest using the Internet as a weapon. His complaint to Mondo 2000 regarding the use of technology by the apartheid state is legendary. In 1995 he actively campaigned to put the ‘right to receive and right to impart information, as well as ideas’, i.e. communications freedom and cognitive liberty in our constitution, (right 16.1 b) by canvassing Jay Naidoo and Pallo Jordan, and hosting a series of events on Free Speech Net Rights at the first internet Cafe in Cape Town, the iCafe. He subsequently participated in the 2011 Highway Africa Digital Indaba.

In 2006 Lewis was frogmarched out of WP Koerante for complaining about race profiling and de facto newsroom segregation.

In 2007 Lewis was arrested for complaining about the suppression of a news story about jazz legend Robbie Jansen.

News anchor Zulpha Kahn an employee of the cartel responded with false allegations that were thrown out of court, and Lewis was not required to plead.

The Media24 group attempted to gag Lewis, forcing FXi to pen an open letter to directors, including Hein Brand.

Lewis was ejected from  the 60th World Association of Newspapers Congress for presenting a pamphlet critical of the Independent Group of Newspapers.

In 2013 Lewis became a minority shareholder in Sekunjalo (now AEEI) the publicly-traded entity whose holding company is part of a consortium which has bought the Independent Group.

Lewis is a founding member of environmental movement Earthlife Africa.

He is also the past steering committee member of the People’s Health Movement.

Lewis participated in the 17 Conference of the Parties held in Durban, and also the 3rd People’s Health Assembly.

This work is cited in BLOGGING, JOURNALISM AND THE PUBLIC SPHERE: ASSESSING THE VALUE OF THE ‘BLOGOSPHERE’ AS A NEW FORM OF THE PUBLIC SPHERE. A CASE STUDY OF THE MAIL & GUARDIAN ONLINE’S BLOGMARK A thesis submitted in partial fulfilment of the requirements for the degree of MASTER OF ARTS IN JOURNALISM AND MEDIA STUDIES of RHODES UNIVERSITY by FORTUNE SIBANDA

“The fault of the South African system of censorship is not that it is public, that it is interference of the state in the private affairs of its citizens, as has often been argued, but precisely in that it is private, itself shielded from a public debate of the norms and values underlying its judgments. In fact, the South African system of censorship is private in a dual way: first it is private in that it is shielded from the public debate in court, even shielded from any debate in newspapers or any other public medium; second in that the laws which determine its making are the private laws of a ruling minority forced down the throats of an oppressed majority.” Peter Horn, 1979

“Any form of censorship assumes that there is one group – usually a minority – which is wiser, more intelligent, more moral than another, which protects another group which is prone to be seduced, led astray, outraged or insulted by some form of writing, painting, music or other form of self-expression. Any form of censorship therefore denies the full equality of all the members of a society. The censors depict themselves as adult and responsible, and insinuate patronisingly that the rest of humanity, the majority, is in a childlike state of irresponsibility.” Peter Horn, 1989

Articles published by Medialternatives have been referenced on History Matters and South African History Online. 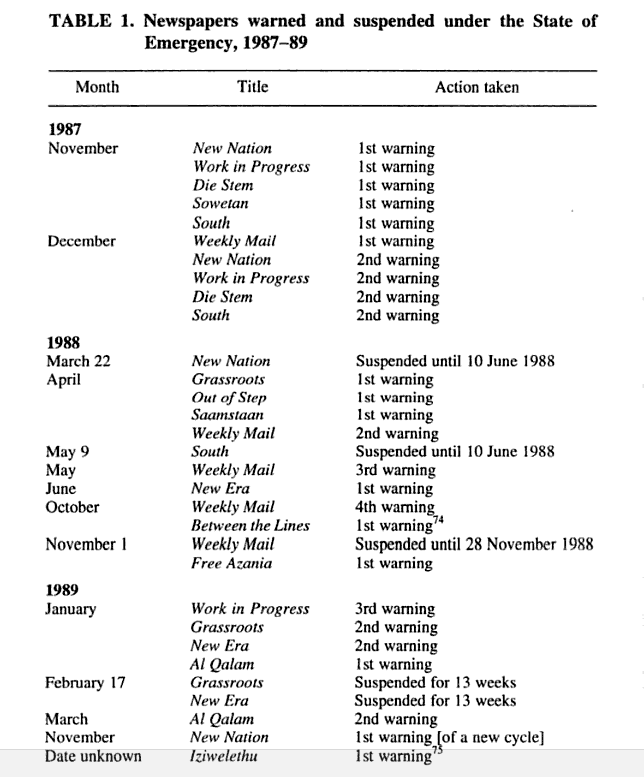