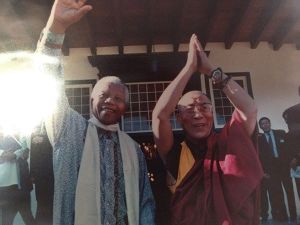 WHAT would have been the celebration of 20 years of democracy, a 60 million rand Nobel Peace conference hosted by Nobel Laureates and the City of Cape Town has turned into a symbol of all that is wrong with Jacob Zuma’s administration.

The regime has seen fit to sell off South Africa’s sovereignty to the highest bidder by denying the Lama a visa, resulting in the cancellation of the conference.

It is barely a year since the death of the nation’s founding father, Nelson Mandela. Instead of celebrating and remembering the Nobel laureate, along with the secular ideals which he fought for throughout his life, Zuma chose to thus scrap any festivities, allowing the Chinese communist party to instead dictate foreign policy.

This comes as protests by occupy central are mounting in Hong Kong. Those old enough to remember the events of Tiananmen Square and the protests of 1989, which ushered in a period which included the fall of the Berlin Wall and the end of the Cold War may remark on the significance of the 25th anniversary of this event colliding with our own country’s history.

Mandela was a remarkable non-sectarian and a bipartisan. South Africa thus has a secular constitution with numerous rights and freedoms articulated by Mandela and for which thousands of his compatriots died, yet the promise of freedom has proven illusory.

The policies of the current Zuma administration appear to lack any foundation in democratic freedoms, instead they merely enslave the masses to future debt repayments in the buy-now pay-later scheme that is producing a generation who have material possessions but none of the spiritual wealth of the previous generation which was prepared to pay the ultimate price.

Like Mandela, the Dalai Lama stands for compassion, simplicity, right livelihood, care of the earth, and living according to our human scale. His values are as much a part of the Mandela legacy as they are the treasure of the Nobel Peace laureates and each of these luminaries respective struggles.

The high regard they have for the Lama has been illustrated by the unanimous withdrawal by every Nobel Peace winner on the planet. That we have lost a major conference which would have boosted South African prestige and given the country a much needed foot up in the world of international diplomacy is a tragedy.

The perception that we are merely lap-dogs of Chinese capital, churlish sycophants who pay lip-service to the constitutional values enshrined in our Bill of Rights has been etched across world media.

Is South Africa really just a bit player in BRICS?

Are we witnessing the very opposite of wealth creation, as an uneven economic environment ushers in, high interest rates, inflation, retraction of wealth, a trade deficit and further unemployment?

South Africans must decide whether we want to continue along this materialistic path, or do what is necessary to preserve the legacy of Nelson Mandela, even if it entails living simply and within our means.