FAR RIGHT, historical revisionist Ilan Pappe pronounced on his version of reality from the Gatesville Mosque in Cape Town on SABC television yesterday. While we both agree that a binational state with a common constitution is possibly the best solution to the Middle East problem, we certainly do not agree on the need to lie about history in order to satisfy the narrative of 1,6 billion Muslims.

According to Pappe and the Muslim Brotherhood, Arabs are superior in every way including their suffering, which took on a perverse new form this week as the disproportionate response to Hamas rocket attacks by Israel left thousands dead and wounded in Gaza. The infanticide and needless slaughter received international condemnation, in particular from UN secretary-general Ban ki Moon.

Pappe is at best considered a sloppy historian, his views are no doubt controversial.

The root of the problem here is a pathetic blood libel and religious vendetta that seeks the imposition of a theocracy and the creation of an Islamic State under the Caliphate. Instead of a Freedom Charter guaranteeing human rights for everyone in the region, a secular democratic state for all. Hamas have an infamous Death Charter calling for the destruction of Jews in a final battle.

Whatever ones position on Secularism and the nation-state, (surely all nation-states are defunct in an interconnected, post-modern world?) the question remains on how to avoid further bloodshed in a region characterised by strange beliefs, conservative ideas, tribalism and blood ties.

Inventing propagandist lies and feeding the Zionist state’s paranoid reason d’etre for further collective punishment of Gazans by producing more Nazis, the permissible genocide of theocrats, does not assist us in the broader struggle for civil rights and Secularism. Anti-Semitic attacks have simply increased because of Israel’s bombardment of Gaza, the situation is lose-lose according to Amos Oz, and Israel’s response to rocket attacks is excessive.

It is thus important to examine the latest round of mendacity posing as a new mythology or catechism — articles of faith that are being recited by theologians, theists and the faithful.

Myth One: Jewish refugees from Nazi Germany are merely settlers on holiday in a land bereft of Jews. This ahistorical and revisionist approach to the predicament in which the events of the Holocaust are first delinked from the events surrounding the founding of Israel and then quietly forgotten is morally reprehensible.*

The problem of Jewish refugees following WW2 is not one that is easily dismissed, even by non-Zionists. So too the problem of Ethiopian and Arab Jewish refugees — Jewish refugees black and white — who in the minds of Arab Islamic supremacists simply disappear from the narrow debate in which all Jews are absurdly considered to be of European origin, even if we were never accepted as white by the Aryan master-race promoted by Adolf Hitler. Black Jews  from Yemen and Eritrea who would have been subjected to apartheid legislation if they had migrated to South Africa, must be accorded status as persons, in any new dispensation, a legal requirement for which neo-fascists like Pappe fail miserably to consider.

Myth Two: The displacement of peoples, whether Jewish Palestinian or Muslim Palestinian, was not the tragic result of the failed 1947 UN Partition Plan and the 1948 War of Independence which followed but is rather a diabolical plot formulated by David ben Gurion and consistent with ethnic cleansing. Hence there was no Holocaust per se, nor even a UN Partition Plan.

This focus on a singular Zionist struggle which ‘occurred in a vacuum’ fails to explain prior agreements such as the 1919 pact between Chaim Weizmann and King Faisal to create a Palestinian and an Arab State. Jewish Palestine thus became independent in 1948. It ignores earlier precedents such as the founding of modern Greece in which population swaps occurred between Greece and Turkey.

The Nakba is the tragic result of the failure to accommodate all Palestinians following the collapse of the Ottoman Empire due to its support of Kaiser Wilhelm in World War One and Hitler in World War Two (Turkey it must be noted, then a newly created nation-state, is the result of a nationalistic and armed uprising under Kemal Ataturk, it signed a non-aggression pact with Hitler, while the Mufti of Jerusalem, Haj Amin el Husseini supported the Final Solution)

Myth Three: The disputed territories, including the rest of Israel, are occupied illegally in defiance of UN resolution 181 and 242**. Both resolutions recognise the right of Israel to exist within defensible borders. Rights which are not recognised by any of the Arab States controlling 600x more territory than Israel.  Even Nelson Mandela recognised this right, but since he was a bipartisan he sided with the PLO on its interpretation of what Israel’s borders are. (I tend to agree with him, but at what cost do we pursue the dispute?)  It should be noted here that none of the Arab States support Hamas’ grand scheme  in terms of its Death Charter and have tended to side with Israel in this regard, “The Arab states’ loathing and fear of political Islam is so strong that it outweighs their allergy to Benjamin Netanyahu.” The Saudi King has criticised Hamas’ willingness to sacrifice its civilian population. The general cost in terms of human life is staggering and needs to be seen in the context of the ongoing war in neighbouring Syria where 150 000 plus persons have lost their lives including women and children. Both parties thus appear ready to engage in wholesale slaughter and cannot be trusted to have the best interests of the rest of the world at heart.

Myth Four: Israel has not given back any land for peace, since Jews never owned this land to begin with.  Such statements fail to take into account deeded property owned by Jews, in particular land owned by Arab Jews which was confiscated by Arab States in 1948, some 100 000 square km of deeded property. Arabs occupy 600x more land than do Jews, and yet refuse to share this land with Jews as well as Africans, Asians and Europeans. The entire Sinai Peninsula was given back to Egypt in 1979. Egypt occupied the Gaza Strip from 1948-1967.

Gaza like many other Arab States, lacks the diversity of multi-cultural expression associated with Secular societies around the world. Its quest for an ethnically pure Islamic State to be built “on the rubble of Israel’ has had quite the opposite effect.

Gaza is roughly the same 360 km2 area of land marked out for Jews under the Caliphate — the maps that people like Pappe bandy about are not only deceptive —  failing to show the partition of British Mandate Palestine into Hashemite Palestine and Jewish Palestine, but gloss over the failed UN Partition Plans in which the Levant was once again carved up between Jews and Arabs.

Can we continue to operate on the assumption that this 360 km2 is the true extent of all the property owned by Jews in the Middle East while bearing witness to the tit-for tat destruction of Gaza as its borders are pushed towards the sea?

Myth Five: Zionism is always to blame since Judaism is merely a cult started by Napolean Bonaparte***. Arab Supremacists, just like in Apartheid South Africa, promote a particularly vicious rival ideology based upon religion. The war being waged between North and South Sudan is indicative of this Arab and Islamist extremism. 140 people were killed in fresh rounds of fighting that broke out in Jonglei and Upper Nile states less than a week ago while similar problems continue to plague both the Central African Republic and Nigeria.

Thus the same people who decry Israel’s supposed maltreatment of its Ethiopian and Bedouin population are nowhere to be found when these folk are killed by Hamas rockets and look the other way when Africans are slaughtered by Boko Harem and M25.

Myth Six: What is happening in Israel is race apartheid not religious apartheid. South Africa saw race segregation, i.e segregation according to the pseudo-scientific notion of race and ethnicity. In order to believe any of the claims made by Pappe, we have to accept that all Jews are white, which clearly they are not. There is nothing linking Russian and Chinese Jews and Kazarite and Ethiopian Jews, save their religion. The problematic status of black Jews in Israel continues to be a consistent point that is not subject to scrutiny or debate. As is my own case in South Africa regarding Secular Humanistic Judaism which accepts in broad terms that “Judaism is the historic culture of the Jewish people” and “A Jew is a person who identifies with the history, culture, and future of the Jewish people”.

Please see my posting here with regard to allegations made by the SACP in this regard.

We are all held hostage

We are all hostages of the resulting problems of theology and religion.

The South African struggle was a civil rights struggle against theocracy in particular the right-wing agenda promoted by the Nederduitse Gereeformede Kerk which sought to deprive non-Whites of land ownership and the vote.  The Freedom Charter thus asserted the need to accommodate everyone, all the peoples of South Africa. It resulted in a Secular constitution and Bill of Rights enshrining a universal franchise and religious freedom (as well as the right to dissent from religion).

Like Jared Sacks, whose irritatingly familiar piece on Zionist talking points published by the Mail and Guardian, which could also be entitled, “Please don’t shoot me, I’m not a Zionist” and which merely precis the work of revisionists such as Pappe, I too have a story to tell.

It is about my disenchantment with Zionism, Statism and the Hamasist Palestinian Struggle.

* A post-Zionist response would accept that Zionism was the best solution to the Holocaust but that such an ideology is no longer needed in an interconnected world in which there is no security behind borders.

** A binationalist or inclusivist sees the problem quite differently from a rejectionist or two-statist. In any event we have already had a two state solution which failed.

***This claim is best expressed by a recent Al Jazeera documentry on the Nakba, hence the need to destroy the tombs and images of the Patriarchs, in order to have a single religion without any rival. It is similar to other populist claims that Judaism for instance plagiarized the Talmud from Islam and hence stole the land in the Levant and so on. Judaism predates Islam by three thousand years, expecting Jews to conform to an Islamic version of Judaism, in which Jews are merely Dhimmi, or People of the Book, is absurd. 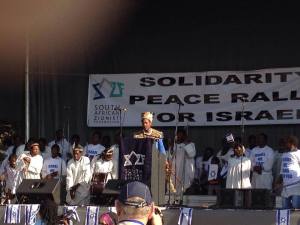 Zionists at a Pro-Israel rally in South Africa demonstrating some of the nuances lost in the debate. 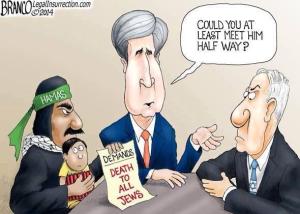 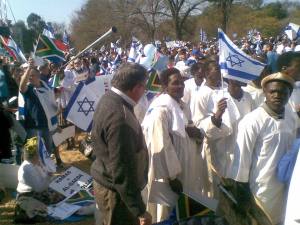 Zionists at a Rally in Johannesburg.